Chapter One: The First Villain

"One event was all it took to break the hero in me.
What started as vengeance got me labeled the villain.
But all it took was one event."

Well, that is his real name.

When he first came in to my café I admit even I was attracted to him. He was just my type. The opposite of what people expected from me. He was smart. Sweet. Polite. A Gentleman. Should have known he was gay.

What I would find out later was that he was a villain.

But honestly, what is a villain? Nobody is born a villain. They are made that way.

Sometimes, it is just the choices they make that seem for the greater good that turn around and bite them in the ass.

That is all it takes. One event.

Rather the event takes seconds, days, weeks, months, or years. It just takes one event to change the hero into the villain.

Just sometimes, it can take one person to save the villain and redeem them; then again…

Sometimes the villain doesn’t need to be saved…

Daniel was one of those villains that didn’t need to be saved. Yes, he was ‘evil’ but what was evil? I mean was anybody pure evil? He wasn’t. After all, I happen to know he has a soft spot for kids.

But when I first met Daniel he was just a typical customer who came in and got a cup of Earl Grey tea and sat down with his notebook and ignored the world around him.

One day as I walked over to refill his cup he asked me a question.

“What are your thoughts on humanity?” He asked as he shipped his tea.

“As a whole we are pretty fucked up. The general population is blind to the majority of what is going on in the world. It takes something major for them to wake up. Example that fucking man in his underwear flying around dropping things through roofs just so he can catch a ‘bad guy.’” Yes, I made the air quotation marks. “We are always in a hurry. Why? We all live. We all die. Good. Bad. All subjective.” I picked up a few scattered newspapers and magazines. “What are your thoughts?”

“Humans are needy creatures who need constant praise and validation that they are doing right. It makes them the perfect species to dominate allowing my world domination plans to come to fruition.”

“Well, yes in general. I will be ruler.”

“How about free will? Freedoms. The ability to make our own choices? I would never be subjected to a totalitarian rule.”

“I mean.... you are right people have to make their own choices and have free will...” He shrugged. “But the majority all want someone to make the choices. To give them the illusion of free will. To give them the illusion of a choice but no actual choice. And of course, you would be exempt from my total rule. You are neutral territory. And you don’t treat me differently. You are different.”

I snorted. “Okay, Daniel. Cause any damage to my shop and you pay for it.”

“Well, yes. But I like your code name better.”

“My code name, given by you and not the one I had for the government, is a name of a country.”

He shrugged. “What was your code name?”

I smirked. “Pray one day you don’t find out Daniel.” I walked back to my counter and back into my kitchen.

“You are a genius! Why never go to college?” He asked one day when we were discussing some math for some weapon he was creating.

I just raised an eyebrow. “And how do you know if I have or not?” I asked as I turned and served a guest their coffee and doughnut.

Daniel sighed. “I hacked your file. Found you graduated from high school right before you were fifteen.”

“I even was sixteen when I graduated and I am a certified genius with an eidetic memory!”

“You must have a similar mind as mine!”

“Or I am a very good forger.” I stated as I turned to go into the kitchen for a moment.

“That may be but this was when you were a child! You had no reason to forge a picture of you in the paper getting your diploma!” He yelled back at me.

I came back out with a try of cookies and put them into the display case. “I will make you a deal Danny Boy. Tell me why you choose this path,” I waved my hand towards his ‘evil’ plans. “And I will tell you why I didn’t go to college.”

Daniel looked at her and tilted his head. “I will get one question a day and you will answer me truthfully.”

I nodded. After all I had a silver tongue and could bend the truth, it was an easy concession.

Daniel sighed. “It wasn’t anything big in terms of world destroying, besides my world. Really. But it was enough for me…” He shrugged. “It was fifteen years ago…”

Daniel was happy. He was thirteen and he finally had heard the words that his father was proud of him. Why? He had fought back and broke that face of the older boy who was bullying him. His father was a blue collared worker and had been an abusive drunk towards his mother and him. It was why Daniel escaped into his studies. It was why in three years he would be out of high school and able to escape for college. He was fascinated with technology and engineering and already had a few patents on a few different types of pieces of technology. One day he would own his own company. He swore it to himself.

But there was something about that pride. It gave him a rush. He wondered what it would be like to stand up to all those hurt him. Or dare hurt his baby sister. She was only five and such a smart cute child. Soon he found himself taking martial arts classes as well, and he got himself a bit of rep of taking on the bullies. He was a ‘hero’ in his neighborhood. He used his brains and brawns. It wasn’t long before he had an outfit that would move with him but protect him from knives that the thugs carried. He was close to making it bullet proof even! He could grow up to be a hero!

He was sixteen when it all went up in flames. He had tussled with the wrong ‘bully’. That would end up being the catalyst to his change.

He had to leave for an award event and would be gone but a day. He was so excited. It was a scholarship to CTU! Charles Technology University was the best in the country for engineering! He would be able to make so many connections that his dream of having the leading company in the world for technology advancement was slowly moving forward! He had packed and kissed his sister goodbye, made sure there was food in the fridge, and made sure that bastard he had as an old man had enough beer to pass out to leave his mom and sister alone. Though the man had yet to lay a hand on his baby sister. He left for the event; today would be the start of getting his mother and his sister away from the man that hurt them. He swore it. He promised it. And he wanted to be a man of his word. The superhero of all stories.

Daniel was on top of the world. He had gained the scholarship. He was talking to all those he needed to know in the industry. He was coming into his own. He was so happy. So, so happy. Then his world shattered. His teacher who had given his name for the award came up to him.

“Danny, we have to talk. Come on.” Mr. Hendry took him into an office. “Danny, I am so sorry, but your sister, she was attacked and killed.” He told him.

Daniel froze. He started thinking a million miles a minute. He would make sure nobody hurt anybody like his sister. “Who? And how?” He asked when he spoke. It was a deep whisper, dark and full of pain and death.

Daniel shook his head, “what followed was horrible. He told me only what the cops told him. But I hacked the files. I saw what that monster did to her. I swore nobody would be killed the way she was again. At first it started as vengeance.” He stated as he sipped his tea looking at me. “Of that I will not lie. After awhile they labeled me the villain. I killed. I didn’t care. After all, my sister couldn’t live why should others. Then that self-righteous prick started trying to tell me I was the villain, and I thought how one event broke the hero in me. I am just human after all. And though my attentions can be good, I will be cast as the villain. I started out a childhood hero, and then my moral compass was broken in the name of trying to make the world safer so nobody else’s world would be shattered like mine was that fateful day. I just kept making hard and harder choices, more questionable choices for the greater good; and in the end I realized I was the villain. I want to dominate to prevent the pain I felt, that I feel. After all, grief doesn’t end. It becomes easier to deal with daily. The wound of that pain never leaves you; it just becomes less of an open wound and more of a scar. So that is my story.”

I looked at him. “College wasn’t my place. I was nothing but a street rat, I could fight, crack shot, I may have a mind similar to yours, but it was broken a long time before I left for the military that faithful day so many years ago. Maybe, maybe, one day you will learn my story.” I filled his cup and walked back to the counter, leaving him his thoughts. 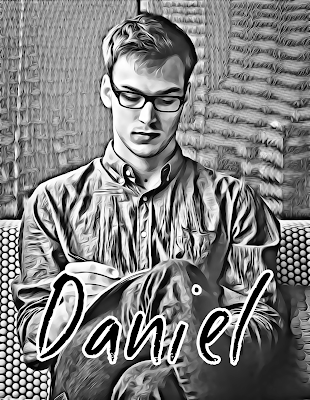 Posted by Katherine Rochholz at 10:31 AM No comments: